Lost Mine of Phandelver Part 5: This Town Ain't Big Enough for the Four of Us 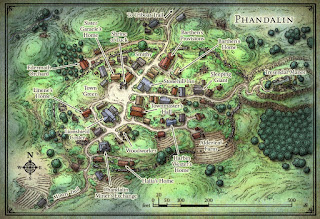 Our adventurers entered the town of Phandolin, unsure of what to expect. The scene before their eyes was that of a town that had been built overtop of an older one. The previous version of Phandolin was rubble and desolate buildings. While the current version was built up along a main road and had one goal in mind, to dig as deep as needed. The party turned their cart over to the Amber Rock Consortium. The reception gnome paid them their fees, and let them know about the layout of the town and the goings on of recent note. Under his breath he informed them that a group of mercenaries called the “Red Brands” had recently taken up “security” of the town. They didn’t do much aside from bullying the townsfolk and getting drunk under the guise of protecting the townsfolk.

The gnomish attendant pointed them to the two inns they could find residency, the Sleeping Giant or the Stonehill, even though the Sleeping Giant had been taken over by the Red Brands. When sober, the Red Brands patrolled the streets, while their leader stayed in the Mayor’s Hall with the Mayor. When they were not, the Red Brands prowled the streets, looking for trouble and innocent people to antagonize. The party thanked the gnome and went on their way, eager to find more information about the town. 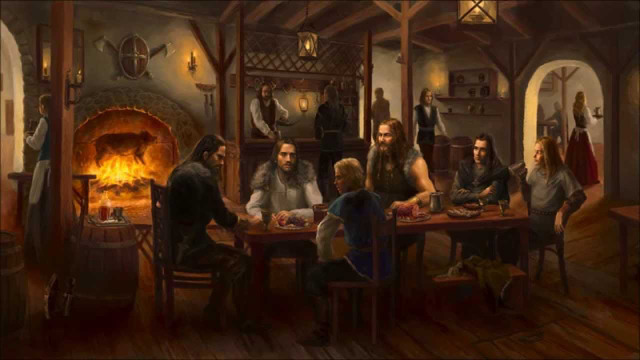 At the Stonehill Inn, they talked with the bartender and proprietor Toblen Stonehill. Toblen told them they should probably keep a low profile as the Red Brands didn’t like people poking about too much. The adventurers took a seat at a table and glanced around the bustling bar, taking a note of people who they may want to talk to. A lady sat knitting quietly in the corner, many a group of farmers sat around drinking with friends, and a lone dwarf sat nursing an ale quietly and sullenly. Finbin, seeing an opportunity, approached the lady knitting and purchased her skills in needlework to sew the wolfskin from the beheaded wolf to the hood of his cloak. A proper trophy to show his strength in nature.

Tifatina and Trajek then approached a group of farmers as Finbin and Ivy settled in to eat their lunch. The encounter could not have been more awkward as the Half-Orc and Gnome quickly realized they had nothing in common with the humans responsible for tending the earth on the outskirts of Phandolin. They did learn, however, there was a tribe of orcs on the outside of town who looked as if they were preparing to raid. Ivy and Finbin then got up to talk with the dwarf, he said that Sister Gariel had returned from her trip and looked fairly bedraggled. Our adventurers reconvened and exchanged all they knew. Ivy persuaded the group to at least talk to Sister Gariel in order to find out what religion this town seemed to follow. 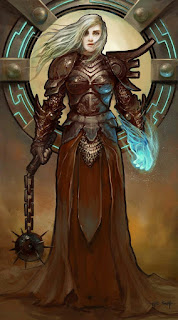 Ivy, Trajek, Tifatina, and Finbin walked out of the inn to find Sister Gariel. It wasn’t hard as she was standing text to the shrine in the middle of the road. Sister Gariel seemed amicable enough, she greeted the travelers with a pleasant smile and asked what she could do for them. The travelers informed her that there were rumors spreading around the town about her journeys and they would like to inquire into the nature of her exploits. Sister Gariel signed, not enjoying admitting to her own failures, she explained to them that there was a banshee outside of town that had knowledge of some magical books. Her organization, the Harpers, was deeply interested in these books and she was desperate to find them. She made an offer to the adventurers to help her get the information needed from the banshee. Sister Gariel had tried a very direct approach, nad the banshee refuted her offers of friendship. She did reccomend to Ivy that praising the creature’s beauty might be the best way to go about things, and gave them a silver comb to give as a present to the banshee.

Concluding their business with Sister Gariel, the adventurers walked back to the inn to talk and think about their options and all the goings on in the town….
Journal Lost Mine of Phandelver