Lost Mine of Phandelver Part 4 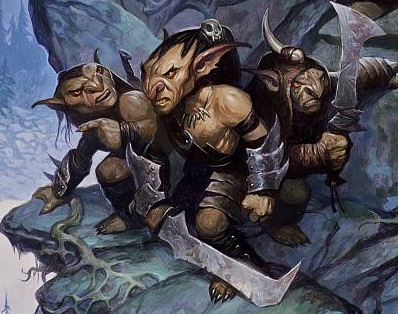 Breathing heavily and weary from their fight with the goblins, the party debated what to do with the captives. Trajek wanted to use them as meat shields while the adventurers investigated the rest of the cave, Finbin wanted to be done with them and off the treacherous and evil things. Eventually, Finbin caved to the large half-orc’s wishes under the assumption they would set the captive wolves on a chase after the goblins on the way out. Finbin hated goblins, and felt sick at the thought of leaving any alive. To him they were the embodiment of pure filth and conniving ways, always trying to weasel out of challenges in life. Trudging on through the dim cave, they came to the locked room. Looking around, the party noticed the sluice which had been used against them and paused for a moment to watch it fill. Breaking their pause, a voice called out.

Recognizing it as another goblin, Finbin again assumed the role of Yeebow and convinced the newer goblin, Nerk, to join his bretheren in the shieldwall of goblins. After Trajek again tied up their latest catch, the party pushed on. Trajek and Finbin close behind the goblins, with Tifatina and Ivy behind them. The party knew what was left in the cave, the goblins had told them that only “da big boss” was left and his companion Ripper, a wolf. The goblin leader was described to the adventurers as being 3 goblins tall, which Ivy deduced would be either a bugbear or hobgoblin.
Entering the next chamber the adventurers gazed around, only seeing a few boxes and barrels with an insignia on the side, a couple of stalagmites, and the fissure in the back. When all of a sudden, a cry rings out from behind some of the crates. 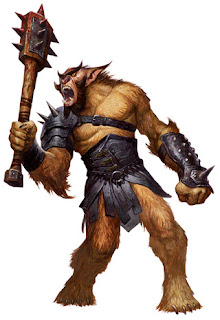 Stepping out from behind their cover are two goblins with bows, a massive bugbear with a spiked club, and a snarling and salivating wolf. Nimble fingers traced the bowstring, as Finbin drew and shot a well placed arrow. A loud smack filled the hall followed by a bellow of rage as his arrow struck home right along the collarbone of the bugbear. Not to be outdone, Trajek sprinted over to one of the goblins and attempted to run him through with his spear. Alas, today was just not Trajek’s day, as he missed and scraped a chunk of wood off a crate. The adventurer’s weariness showed when their opponents started to fight back however, and it almost meant the end of the line for some of them.

The goblin Trajek missed cackled with delight as he drew his scimitar and drew a fresh, deep line up Trajek’s chest. Glassy eyed and falling backwards, this was certainly the end for their half-orc companion. Trajek caught himself from falling and in an impressive feat of constitution looked to withstand the deadly blow. With a whirl and a smack, Tifatina let the bugbear know her newfound friends were not to be messed with as she connected rock to skull.

The gnome then uttered something in druidish and a light leapt from her fingertips to Trajek’s chest, sealing his wound. Tifatina smiled, knowing she had made her friend that much safer. Ripper the wolf sprinted towards the party at an alarming rate. In a moment of confusion, the wolf decided the bound goblin next to Finbin was also an enemy and decided to attack him instead. This is where Nerk met his unfortunate end, headfirst down the maw of a savage wolf. Seeing a gap in the line of defense, the bugbear sprinted at Finbin, angered by his wounds and wishing to smash the intruders to bits. 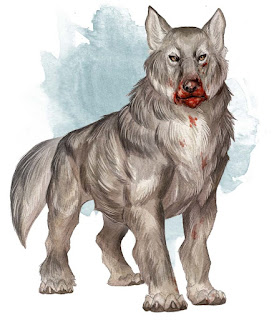 The bugbear raised his club high over his head and brought it down with a thunderous crash. The halfling ranger had no time to move and was flattened to near death by the blow. With Finbin barely clinging to life Ivy ran to his side and cast spare the dying on his body, attempting to keep him alive long enough so the party could find him some actual healing after the monsters had been dealt with. The wolf didn’t care at all, seeing easy prey, it clamped down on Finbin’s side, further injuring the halfling.

Trajek cornered the goblin in a corner and ran him through with his spear, making sure the only sounds coming from him was the squelches of organs and tissues being torn apart. Tifatina noticed another of her friends was in grave danger and bravely decided to heal them too. Speaking in druidish again, she cast the same spark of light on Finbin healing his wounds and bringing him back from the edge of death. She slung another rock at the bugbear in irritation, just for good measure. The bugbear reared up to smash the pesky gnome but he had taken one too many rocks to the eye and missed as his club came down next to Tifatina. Finbin, stood, and in anger, drew his sword and stabbed upwards at the gut of the bugbear for what looked to be a close to the end for the beast. Ripper saw Tifatina as the biggest threat then and decided to take a bite at her, catching her on the arm. Ivy decided it was time to call upon her primal savagery and proceeded to claw the face of the bugbear, melting it down past the bone. With the leader fallen, the rest of the enemy party collapsed. Tifatina and Finbin took down Ripper, with Finbin beheading the wolf and keeping the skull. Trajek was able to knock the last fleeing goblin down the fissure with his boomerang. As the fight ended the adventurers listened to the musical sounds of a goblin falling headfirst thirty feet to an unsightly end. 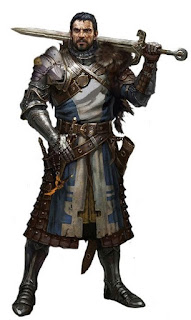 After the enemies had been disposed of, the adventurers investigated the room. The crates had a blue lion rampant on the side with the inscription “Lion Shield Coster.” Inside was nothing more than mining equipment. In one of the crates was tucked a rusty chest with some gold and health potions that the adventurers took faster than the blink of an eye. With no sign of Gundrin, they made their way back to Sildar to see if he had come to. Sildar was barely conscious when the adventurers reached him. However, he was able to answer some of their questions about the events leading up to this cave. The goblins ambushed them and captured them the day before the adventurers set out. Sildar and Gundrin had been interrogated but the bugbear seemed to be after information only Gundrin had. In their excitement the goblins kept mentioning “Black Spider” and “Craigmaw” through the interrogations, although Sildar had not a clue as to what they meant.

The party made their way back to the cart and set up camp for the night, tending their wounds and resting their bodies. Sildar filled the adventurers in on exactly what the big project was, it was a mine that had potential to be a lost magical wellspring that had been lost for hundreds of years. Apparently Gundrin and his brothers weren’t the only ones interested in it as multiple mining startups were competing for it, and now, so where the goblins and this “Black Spider.” In the morning the party made their way to Fandolin without experiencing troubles for the rest of the trip.

-Written by Sean M
Lost Mine of Phandelver