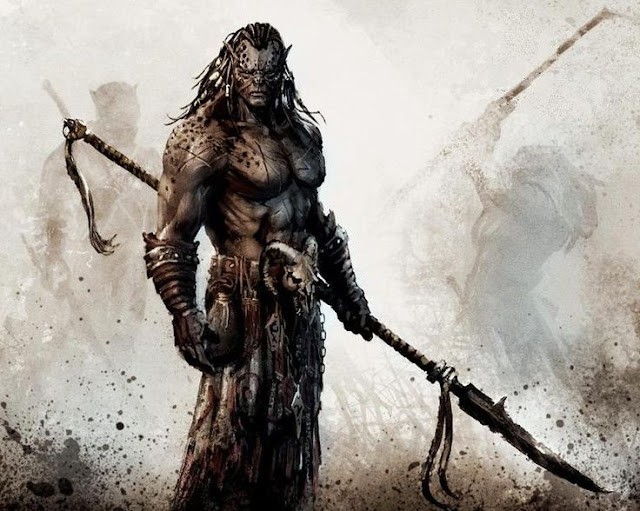 Trajek Gloomhammer, Druid
He woke to have his bandages replaced, Trajek had come to realize over the course of the past week that things in his life would have to change, there would not always be a next time, and while his hold on life was not so tenuous as in days past, the Old Druid’s message was clear. From here on out he must adapt, or die.

Trajek Gloomhammer began his adventures as a soldier. As orcs are naturally drawn to combat there was plenty of opportunity within the tribe to prove oneself and setting off to sell his sword proved fruitful. Being a half-orc made work easy to find and his skill at arms made that work easy to do. It also provided an ego that was not easily deflated.
The skirmishes and battles that were fought, won or lost did not take a physical toll on the half-orc. Lords come and go and the lines around nations are changed with pens as well as swords. He won gold a glory throughout his travels but it was a different price Trajek paid, and one not easily afforded. The years grew longer, and the days grew grim. A gloom hung over the half-orcs mind, friends became memories and the glories won in battle become naught but songs or campfire stories. His pride turned to arrogance. 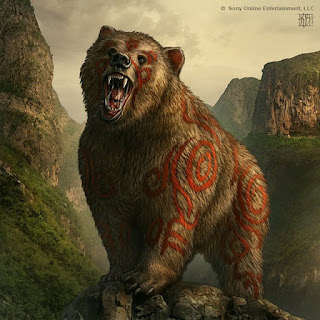 He took stock in his surroundings. The years and battles had turned familiar faces into ones he hardly recognized, both the haggard, beaten faces of the few old soldiers that remained as well as new unscathed faces of fresh recruits. It was time. That night Trajek left the camp, his life as a soldier had come to an end, he simply walked into the darkness.

Escaping to the woods offered little reprieve. These bounty hunters were not easily eluded. Though the arrows had ceased it was their blades that worried him now. In his current state he did not get far before he heard a challenge called out behind him. It became clear that his arrogance, his pride had caused him to mistake these hunters as no more than the 2nd rate cut-throats he had been used to defeating. Each time they sent men to collect him, he had sent them back in boxes, it seemed today that a much larger box would be required.
Cursing his bullheaded attempts to overpower such a large party Trajek turned and hoped his ancestors would see to it he died well.
Trajek turned to meet his challengers, his legs giving slightly, he had been right, the blades had been poisoned. As he straightened and raised his spear in defiance, a great roar ripped through the trees...

A great bear smashed its way into the clearing. Faster than any human eye could follow it tore through Trajek’s hunters with unmatched ferocity. All save one would never rise again. The attack was over in seconds, the bear's claws were not subtle weapons and pieces of his attackers lay scattered around the clearing. Seeing the slaughter before him Trajek fell to his knees no longer able to stand. The bear turned his massive head towards towards him and Trajek was taken by sleep.
Later, in town, a man would tell of a huge bear, the biggest the world has ever seen, and of the half-orc who would not be taken alive and called forth the great beast to fight on his behalf. 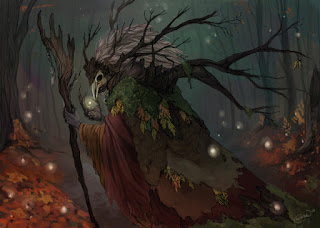 The Old Druid spoke little. The days after Trajek’s rescue had run together in his mind more as sights and feelings than any rational memory of his experience. He knew he was alive, he knew he was in a cave, and that his attendant referred to himself simply as the Old Druid.

Life for Trajek proved difficult in the days following the Old Druid’s departure. In the weeks and months after his recovery Trajek had learned much from his new guardian. Which plants and animals to avoid, how to move quietly through thick brush, and that the will of the wild is absolute. His mind began to register the changes around him, the shifting breeze, the chattering of birds and small animals and his arrogance changed too; humbled before the complexity of nature, he began to understand that this was where he belonged.
Background by Curt
Lost Mine of Phandelver