Curse of Strahd Part 15: The Puppetmaster and the Toymaker

I hope someday these letters reach you, hopefully hand-delivered in this journal by yours truly. In my search for Captain Frostclaw, I seemed to have stumbled into a far different land than I have ever heard of. Before you go off berating me for being unable to even read a map, this place is not on any map, nor is the culture like any society we have ever learned about. I doubt even Lanegan, your favorite son, would have been able to avoid a trip to this sullen land.

This place is horrible Father, as if it were a land bent on bringing your worst nightmares to bear. I stumbled into an tavern called The Blue Water Inn. However, I have failed to see any blue water anywhere around in this desolate land. The inkeep took me in and I was able to secure some warm food for the first time in a couple of days, as Outrider rations were running low. He said he had some people I should talk to, and looked uneasy. I can’t imagine the people of this place could feel anything else given the environment, it seems fairly oppressive. 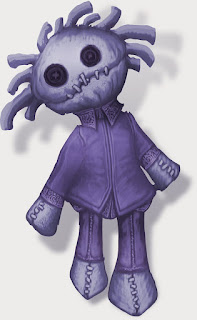 The group of people the innkeeper brought down was nothing short of the most odd group I have ever seen. Had they not been armed to the teeth, and some quite literally, I would have thought them a theatre troupe. The first one in, a lady of stunning beauty, very easily the most beautiful woman I have ever seen. She introduced herself as Driesssa, she looked almost angelic. The next was an odd looking bird-person. I’m not sure what witchcraft they took part in, or got into, but I was glad to have Ava also by my side. Caecilius was next, and we have what seems to be a similar thought process on most things. Although, he wasn’t a man, he was a dragonkin, he was slightly more human looking though, and he had a might in battle very similar to the knights of our land. A most impressive warrior. Finally there was the man Vrice, a behemoth of a being; maybe as large as Xavier. Vrice seemed reserved and tended to agree with Ava on most things. A skilled pikeman and an astute observer, Vrice is a companion I am glad to have found.

There is a woman who seems to be working with these companions by the name of Ireena. I am unsure of her purpose here or her intentions, she stayed behind at the inn while we took care of things around the city. Hopefully in the future I can better learn who she is and why she is here.

The group had business in the city and I tagged along to see if I could find out more information about where I was, and how I could find my way to Captain Xavier. While travelling with this group I learned I was in a place called Barovia, ruled by a vampire by the name of Strahd. It sounds as if defeating this monster is the only way out of here, and the only way to help our people. Maybe if I manage this, you’ll finally appreciate me for the man I am. 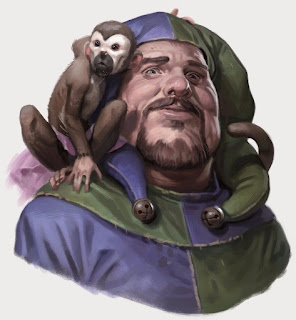 We visited Blinsky, the toymaker in the city, as he seemed of some importance to the party. I sensed little more than a confused man bullied into work by the town guard. He was making dolls of the woman we left back at the inn. An odd and disturbing commision, but not worth any sort of punishment. Driessa and Caecilius seemed to think it was worth noting. We then made our way to the church, I was hoping this could be a beacon of hope in this forsaken place, unfortunately I was wrong. Father Lucien of St. Andral’s church was rather accepting, even if I have never seen or heard of the faith of this place. The priest told us the bones of their saint had been stolen, rendering this church unprotected. The people here deserve better than this, what faint glimmer of hope the common-folk had vanished without warning. The longer I spend in this hell, the more I realize the only way out is to win at this sorcerer’s game. We followed leads given to us by the priest until we tracked down the missing bones.

The altar boy (Yeska) had been interrogated by the groundskeeper (Millivoj) about the location of the bones.Millivoj, the poor man, had been offered a sum of money he would probably never see all at once in his lifetime by the coffin-maker (Henrik Van Der Voort) who had apparently needed the bones. The trail stopped at the coffin-maker, who apparently had been offered 1000 gold pieces to hide these bones for a while. How could someone who was a part of the town, take something so precious away from the people? A vile act of selfishness, done by a man corrupted by coin. Fuming at the cowardice displayed, I stormed upstairs in the coffin shop where the man hid the bones, followed by Ava and Driessa, while Vrice and Caecilius stayed to watch the shopkeeper.

As I moved into the room we noticed a lot of dirt on the ground, unable to draw conclusions from that, I stepped in. Erupting from two of the crates, what could only be identified as vampires came at us. I am strong Father, I know I can use that to help these people. You may not see it, but one day you will. These vampires will not harm the townsfolk, I cannot allow that to happen. I stood between my newfound friends and these vampires, fending them off so they could ready their own weapons. Apparently these ladies are the most vicious of spellcasters, holding nothing back as projectile after projectile flew by me and contacted the vampire closest me. I yelled for Vrice and Caecilius, hopefully they could make it up here to help us. A fully grown vampire is nothing to ignore.
We traded blows, Ava and Driessa throwing magic, Vrice, Caecilius, and I keeping the vampires at a distance and putting steel into flesh. A third vampire erupted from the boxes, but by now the energy of a fight was flowing through our blood. We destroyed them handily. Gathering the bones, we made our way down the stairs. There was a man waiting for us, cane in hand. It was Strahd, the vile being keeping us here and unable to return. He didn’t do anything, more as if a cat were to play with a mouse. I was a little intimidated, but I cannot let that show. 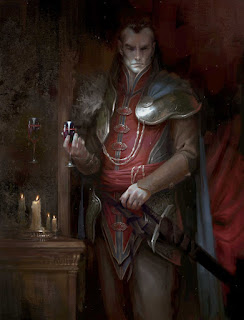 When he left we made our way back to the church to return the bones. Father Lucien was ever thankful and returned the bones to their resting place. He offered us a stone that could let us talk with inanimate objects. While I would like it so I could talk with Osprey, I believe someone else in the party could put it to better use. We made our way back to the inn, Driessa seemed to be looked at as some sort of dieity. She took this role in stride, I applaud her for it, giving the people some little hope. They are going to need it for the days to come.

There was a man standing outside the inn, he had an arm that was aflame. This is an odd place. According to Caecilius, this man is the town bully and head of the guard. He was turning out a wandering troubadour, who had apparently overstayed his welcome. I felt for the performer, but he seemed to be in high spirits. This man, Izek with the Flaming Arm, told us our presence was requested by the mayor, or whatever title the same position held in this town. I do not know what the future holds Father, but I hope at the end of things you hold me in higher regard.