Lost Mine of Phandelver Part 2 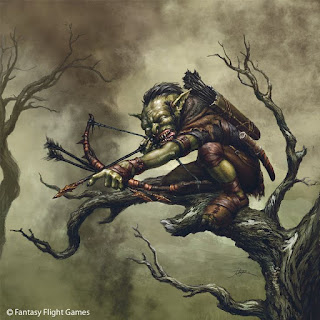 We resume our story as the company is about to set off on their very first adventure! It’s a matter of walking next to a cart from one town to another. Finbin, Ivy, Tifatina, and Trajek were all warned that the trail could be rough, but how rough could it be? The adventurers met up with the supply cart and oxen at the western end of the market square. Gundrin and Sildar had left the day before to meet them when they arrived at Phandolin.

Setting off with the rising sun, Tifatina and Finbin were bouncing on their feet and excited. Ivy and Trajek were still feeling a little bit of the effects from the night before. For a couple of hours the job had gone without a hiccup, the party amused themselves by walking and talking and getting to know each other a little better. Finbin spoke of his family back home, and how deeply he cared for them. Ivy expressed her interest in the god Rillifane. Tifatina and Trajek talked about their time studying druidism together and their travels towards Neverwinter.

The ground rose up fairly high on either side of the road, with trees and shrubs dotting the roadside before joining up with the larger woods a few feet back from the road. Eventually, they sighted the bodies of two horses laying in the middle of the road. Ivy was able to identify two arrows sticking from the carcasses as being of goblin origin. Before she was able to get the word out however, an arrow whistles by the party. The unexpected attack startled Trajek and Finbin, leaving them fumbling at their packstrings for any answer to the enemies coming. Tifatina and Ivy got rushed by a goblin each, taking some damage. Tifatina swung with her scimitar, but the goblin was too quick and her blow fell on empty air. Finbin stepped next to Tifatina and ran one of the goblins through with a shortsword, while Ivy and Trajek made short work of the second goblin. A third goblin took a parting shot at Trajek, landing the arrow quite solidly before scurrying off into the woods. Trajek attempted to hurl his boomerang at the goblin, but only hit air.

Driven by his hatred for goblins, Finbin started to climb the embankment attempting pursuit. Trajek then was able to quell the halfling’s hate with logic and reasoning while the rest of the party bandaged themselves up. Irritated but calmed, Finbin investigated the site of the earlier ambushes and noticed two trails leading up the embankment that looked as if two bodies had been drug from the horses into what could now be seen as a break in the treeline. After careful consideration by the whole party, they agreed to pursue the goblins into the forest, only after securing the cart and oxen in a hidden location off to the side of the road.

Once the oxen and cart were secured, the party geared up and set out down the trail. In pursuit of the grungy little monster hoping to find out what befell the two travelers on the road ahead of them.

Session Recap by Sean M
Journal Lost Mine of Phandelver