DM Notes
Ireena steels herself after her father and brother are buried, and returns to the mansion. She takes a few belongings, then steps outside. As the party watches, she lights a torch, and sets fire to the mansion, and watches it burn for some time. She returns to the party, “We should rest. Set out for Vallaki tomorrow morning.” the party, severely beaten and bloodied from their harrowing ordeal, do not offer much resistance.

Caecilius informs the party that he intends to find the priest Donavich. The rest of the party acknowledges him, but heads to the Blood on the Vine Tavern. There they speak with the shell-of-a-man Arik, and secure 3 rooms. Ava collapses, while Vrice and Driessa stay in the same room with her, resting. Ireena takes one of the rooms for herself, and rests as well.

Caecilius enters the church to find Donavich softly praying. He is forlorn, and questions why they even bother praying. “Our prayers do not reach the morninglord.” He tells Caecilius of the Devil Strahd and how all hope is dead in Barovia. Caecilius offers some comfort, and shares some of his backstory with him.

The priest goes on to explain to Caecilius that Ireena was not Kolyan Indirovich’s daughter, as she presumed. She was found as a small child in the woods near Barovia. Kolyan took her in, and loved her as his own. The two ponder why the Devil Strahd seems to be focused on her, but are not sure. 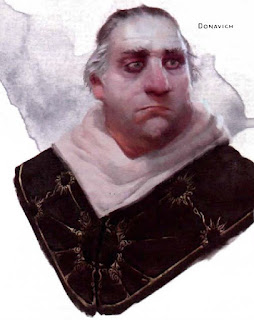 Feeling more comfortable with the priest Donavich, Caecilius shares with him the fortunes they had read by Madam Eva. Donavich keys in on the dragon statue and says he has heard of a mansion to the west called Argynvostholt, that he recalls having something to do with a Dragon; perhaps a silver dragon. He doesn’t have a clue what the woman hanging above a roaring fire is, nor does he have much idea what the “pool blessed by a white sun” is, though he explains the lakes to the West. He posits that the white sun is almost certainly referring to the Morninglord, and directs the group to speak to The Abbot in Krezk at the Abbey of St. Markovia.

When Caecilius mentions the wizard referenced in Madam Eva’s reading, Donavich clearly looks forlorn. If it’s referring to the wizard who led a revolt on Castle Ravenloft, then he is responsible for what happened to his son, Doru. Donavich flatly tells Caecilius “If I see him, I’ll stick a dagger in his ribs myself.” With that, the two talk some more on Religion, and Caecilius convinces Donavich to re-open the church to the citizens of Barovia.

Meanwhile, at the Inn, the party decides they should eat while they can, and head downstairs. Caecilius joins them as they await their wolf-steak. There, they encounter Perriwimple, who is picking up some lunch. They coolly interact with him before he takes his wrapped meal and leaves. The party eats, and chats with Ireena. Ireena is still quite distraught, but does open up some. When Driessa says Ireena’s name in Draconic, and Caecilius repeats this, Ireena looks at them somewhat confused.

Driessa’s intentions were merely to see if Ireena could speak the language, though Ireena misinterpreted it as a cultural ritual. When Driessa then said Ireena’s name in celestial, and Ava repeated it, Ireena seemed confused, but willing to play along. She then spoke a language the party was unfamiliar with, seeming to translate each party member’s name in turn, before smiling. The moment, a confused and awkward social exchange that everyone at once did not fully understand, and was also comforted by, passed quickly.

The party returned to one of the rooms to rest. Caecilius recommended sleeping at the church, as it was hallowed ground. The party agreed, and would head out once they had rested at the inn. They intended to head to Vallaki at dawn. As they rested, Driessa caught sight of the hunched figure pushing a cart slowly through the streets of Barovia. The figure would hobble up each front stoop, and knock on every door. Few folks answered. Some did. For each of the doors that were opened, money was handed to the figure, and the hunched figure handed the waiting hands inside a paper box.

Driessa, Ava, and Caecilius become curious and go out to investigate. There they confront the figure, who stands up straigt and slowly turns around, revealing herself to be a beautiful young woman. She asks if they are interested in purchasing any moonpies. Driessa purchases 2, and AVA follows suit. Caecilius is suspicious, and calls upon his divine sense to view the creature for what it is: A hideous monster taking the visage of a beautiful woman. They send her on her way, and Caecilius warns them. AVA throws her pies away, but Driessa keeps hers close. 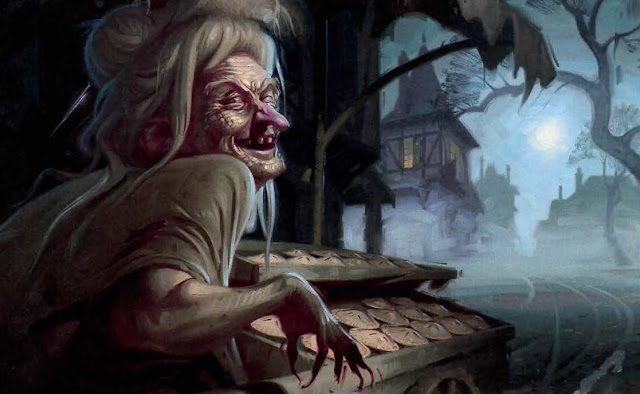 They return to the room, and sleep before they intend to head to the church. During her sleep, Driessa has a dream. She awakes to see the beautiful woman straddling her chest, long blonde hair draping around her. “Why didn’t you eat your pie?” she figure asks. Driessa is unable to move, and awakes in a panic.

When the party awakes, they head to the church, and make a show of it. They find Donavich there, in somewhat better spirits. Shortly after they arrive, several townsfolk also arrive, realizing it is safe to once again visit the church. Vrice helps Donavich assemble some semblance of furniture from the wreckage of the chapel. Driessa buries her moon pies in the churchyard. The party speaks to Ireena some, who sheds light on some of Strahd’s background. She tells thim his father was named King Barov, and his mother was Ravenova. She reveals that he has been the lord of Barovia for at least 700 years. She doesn’t know who built castle Ravenloft atop the pillar stone, but suspects it has stood as long as Strahd has been lord of this domain.

At midnight, the party walks to the cemetery. A greenish fog seeps up from the ground, and shortly thereafter silent spirits of all manner of adventurers and mercenaries rise from the ground, forming a procession that streams from the cemetery to the old svalich road. The party watches in horror as the endless parade marches on in eerie silence.

“That is your fate if you fail” Ireena says. The party understands the gravity, and watch as finally the end of the procession fades from view. “They head to the door of Ravenloft every night, before plunging into the river below.” 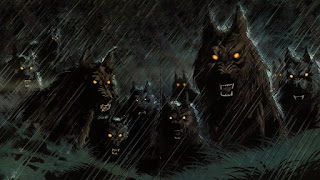 The party rests until dawn, before making haste. On the road, they meet a trapper who had been missing for some days. He warns them of werewolves, who rent his companions days before. Shortly thereafter, the party is set upon by wolves, catching a faint glimpse of a humanoid figure in the mist directing them.

The party is exhausted, and Vrice is gravely wounded but they stand victorious over the wolves.
Curse of Strahd