By Steven - February 11, 2018
Journal of Caecilius
I was standing on the corner of the market looking over the silvered sword I bought. Would have stayed with Vrice, but the blacksmith asked too many questions. I heard a voice behind me.

“How bout a drink, dragon man?” Jhaia, the giant slayer, was holding a skin full of ale. She had some sort of smile on her face. Never seen a human look at me like that. I nodded to her and took a swig.

“Aye. Sorting through what kind of work he has for us. Strange one, huh? Stutters like a drunkard, but that sword hand could still cut a path through half this town I reckon. That face. Shame. He was handsome before.” She was staring off as she said this, until she turned to me and smiled. “You like him?” She added. 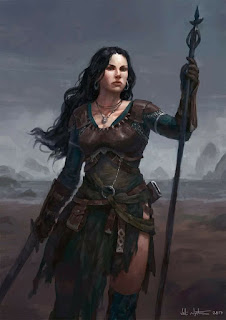 “I don’t like anybody, but he is capable and trusted around here. I don’t doubt he was a fine warrior.” I took another swig and passed the skin back. She took a swig and eyed me.

“So your former, mates..they locked you up? Didn’t have you fighting alongside them?” I felt that familiar burning deep inside as her words came out.

“That’s right. Stole my purpose and my oath. They are betrayers and oath breakers. They are lucky I’m not.” My words were more a hiss than anything.

“What a buncha cunts.” She said as she took out a pipe and lit it. I let out a single grunt of a laugh and nodded. She continued

“That’s the thing about people. Their words don’t mean shit. I say something..I stick to it. Period. The end. Words are bonds. I said I was gonna kill that frost giant if he didn’t leave us be. The people I was with...my friends...some of them turned tail. Left us there. Fucking cowards. Only three of us took him on and only two of us walked away, and of the two I’m the last one standing.” We were both leaning against the wall now, passing the skin, smoking pipes and nodding. We continued talking for some time. Reliving battles and fights talking about where we from, how we grew up. I am not sure I talked to anyone besides my one eyed, cellmate about this. Most never cared and I didn’t care to share it. After a lull where we were silent for some time, she turned fully and looked at me intensely.

“What if it was just you me? Fighting together?Adventuring together? We’d be great together, Caecilius. The people would know our names. It would be fortune and glory. Whatever we wanted really.” She said this while stretching her arms out and pulling them into fists. Something deep in my hearts was stirring, something I’ve tamped down all my life. I hesitated.

“I don’t need fortune and glory. I just want to serve out my oath to Bahamut.” I looked away from her and to the people of Goldenleaf. My words were true they just weren’t complete. Her face twisted into a smile and she laughed as she spoke, but lost none of her intensity.

“Bullshit, dragon man. You may be a holy warrior by choice, but you’re a dragon by birth. I know your kind and I know your heart. You long for glory and to bask in the riches of downed enemies. I like you, Caecilius. This place should be singing your name. They should be awestruck and afraid. We could do that. Be heroes, warriors, slayers.” She leaned back against the wall and puffed her pipe with a smile. “Tell me I’m wrong. Look me in the eye and say you don’t want that.” I took a few long drags and pulls on my pipe and the skin. She knows a great deal. But she doesn’t know me. Doesn’t know how good I am at denying my desires. I looked at her directly.

“What you say is true. Those are my desires. You are the greatest warrior I have seen in battle. You hate giants as I do, and your words hold the weight of truth and bond. I have no doubt we would find greatness and glory together and perhaps someday we still will. The people I’m with, saved me when I was dying. We traveled and found victory. We were tasked indirectly by the heroes of the war who are themselves agents of Bahamut. Albeit ones I wouldn’t have guessed. I owe them a debt I must repay. So I cannot join you now.” She shut her eyes and exhaled a puff of smoke with exacerbation. She smiled and shook her head. Then she folded her arms, cocked her head while she looked at me amused. 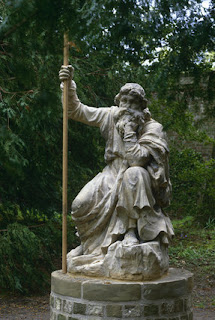 “I like you, dragon man. I don’t think they make
Em like us anymore. People out there are weak. They beg for your strength and your help, but they’ll run when you need it. They’ll discard you when the threat is gone. They’ll get greedy about your earned gold. I’d be careful, people always let you down in the end.” She pauses and looked out. Her eyes fell on the statue of Roric and she looked at it while she added “I guess not all of them. Most of them anyway. To be fair, sometimes you let them down, too. Just because of who you are.” She let out a small almost pained smile at that. I wasn’t sure if she was talking to me, herself, or the statue. Then she turned and stood in front of me. Arms on her waist and close enough to run me through with her sword. She looked at me without fear or disdain, still smiling.

“Well you let me know you when change your mind. I’ll be around..” she started to walk away and turned back, raised her palms in a shrug as she took backward steps “don’t wait too long though, I’m getting old.” Then she laughed a raspy wicked laugh and cut into the crowd. She slid a gold in the fountain of Roric and nodded to it as she disappeared. She left me there as I have have been everyday of my life. A dragon’s heart beating wildly in a paladin’s chest.
Curse of Strahd In Character Journal