Showing posts from January, 2018
Show all

Curse of Strahd Part One: The Order of Rorik 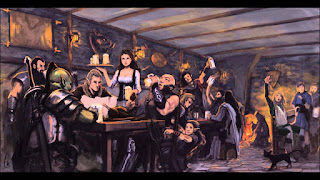 Just a brief post for the first session. We were down Lydia, but the others wanted to start. This session saw a lot of interaction in the town of Goldenleaf, some world building (extended epilogue post Tyranny of Dragons) and some good ol' fashioned random drink table fun.
[Curse of Strahd Index][Next Episode] DM NotesThe party begins in Goldenleaf, with Driessa recruiting Caecillius and Anghar to work with her in the Order of Rorik, a group focused on doing good and helping rebuild after the destruction of the Cult of the Dragon.

Driessa, Caecillius, and Anghar are then issued orders by the Order to investigate Lord Albrecht’s missing son at Blackmoor keep. The party travels to the keep, and begins their investigation. The keep personnel found 2 slain guards by the creek where they were protecting the boy as he played. As it is late, the group decides to hold off  the bodies of some slain guards, and begins the investigation. They find Lord Albrecht to be a grotesquely obese lush…
Post a Comment
Read more 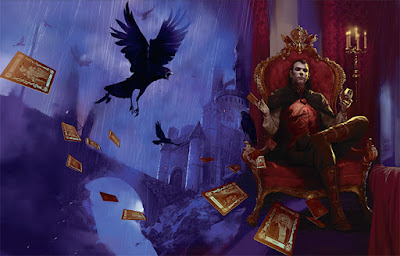 Okay! I'm going to try to keep up with this one since it's hot off the press!

We have started a new campaign, and settled on the Curse of Strahd.

Following this post, I will include our in character journals, and a link to our list of NPCs which is updated after each game.

Without further ado, here are the character backgrounds for the current cast of characters.

Caecilius of clan Ras Played by Sean Caecilius is of clan Ras (pronounced Raisch). Ras was a clan of red Dragonborn that converted to serving Bahamut generations ago. Over the years they won glory and a vast fortune. Caecilius trained and served with paladins in Elturel. He distinguished himself in combat and was a rising name within the ranks. All of this pleased Caecilius who wanted glory and wealth as all dragons do. His nature was always that of pride and strength. He also had the darker parts of his core that are present in all red dragons. A desire to destroy his enemies and hear all say his name with reverence …
Post a Comment
Read more 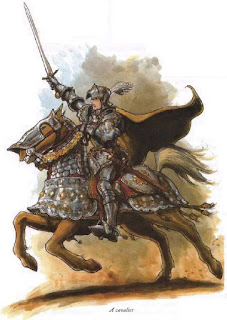 Mounted Combat is a paradigm I've struggled with from time to time here at Castle Mac. The PHB leaves a bit to be desired, and it can be confusing to understand the ins and outs of mounted combat. This became especially painful for me when we played Cubicle 7's Adventures in Middle Earth Lord of the Rings 5e supplement and I chose to play as a Rohirrim. Disclaimer: We at Castle Mac try to stay close to Rules as Written, including the rule that the DM has final say over any rules, even when they override the Rules As Written. This post is an attempt to collect the printed Mounted Combat Rules, collect and parse Jeremy Crawford's Twitter responses (which are more about Rules as Intended), and introduce a few extrapolations of our own to make Mounted Combat more clearly defined. Some of what I observe below is probably quite obvious to most of you, but hopefully will help others!
Mounted Combat Rules as Written (From the PHB)Mounting and Dismounting: