Hoard of the Dragon Queen Journal Pt I 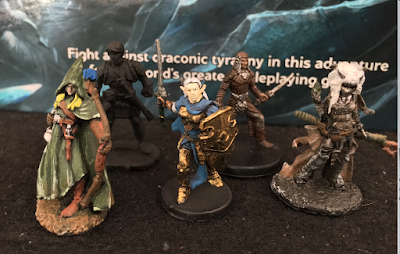 This is the first in a long series of In Character journals written by the players (mostly my friend Sean who is quite prolific!) detailing their adventures as I DM Hoard of the Dragon Queen.

The Player Characters (and authors of their journals!) are:

Journals after the cut!


25th of Elient: Yenorin signs on with Harad the the Boisterous and his Bodyguard Salomar.

28th of Elient: Ennis & Danaeron set out for Beregost from the Wood of Sharp Teeth.

30th of Elient: Ennis & Danaeron come upon Harad, Yenorin, and Nithbis. Harad’s wagon has broken down on the Greenway outside of Greenest. The group travels together.

Near sun-down, the group witnesses the town of Greenest under attack from a group of humanoids and an adult blue dragon. 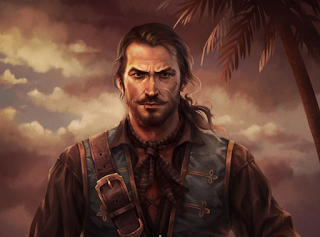 As the group nears the town of Greenest they see a shadowy figure emerge from the forest canopy.  All are struck speechless by his good looks and suave personality.  Before them stands none other than Sallos Zha Zhoala, former pirate captain of the Sea Dancer and far traveller of the Realms.  With a flourish he bows and introduces himself and both the women and the men of the group swoon at his grace.  He tells them a wild tale of how he bested 7 mercenaries in a bar in Baldur’s Gate who admitted to him that they were joining up with the Cult of the Dragon and they were going to attack Greenest next.  Being a man of noble character he knocks the last mercenary out and started off towards Greenest to lend his sword arm, his wit and charm to the town.  It is during this tale to these new companions that he is interrupted by the vermin attacking the town as a half a dozen Kobolds move to attack the party.  As he looked around it was obvious that he was the most capable fighter in the group so he stepped up and challenged the Kobolds.  The creatures surrounded Sallos seeing him as the greatest threat and with the ease and experience of a master swordsman he felled the tiny creatures with some aid from his new companions.  Wth an errant arrow or two from the elves, a spell or two from the enchanting druid, and a few feeble swings from the brute of a fighter the battle ended quickly.  All were so impressed with his skill they asked him to sign their personal dream diaries which he refused for the time being as more enemies were about.

As they followed Sallos through the town, his natural leadership keeping them in step behind him, they came upon some townsfolk needing more of his assistance.  This time there were a dozen of these Kobolds and before they even knew what hit them Sallos had felled two of them with expertly thrown daggers.  This time he held back and let the party contribute more, even feigning to drop his scimitar and one of his daggers.  They performed admirably and together all the Kobolds were slain.  After the fight all came to Sallos and asked for his praise which he gave selflessly.

Soon the thankful townsfolk led the companions to the towns keep where Sallos enjoyed some well deserved ale and a quiet nap. 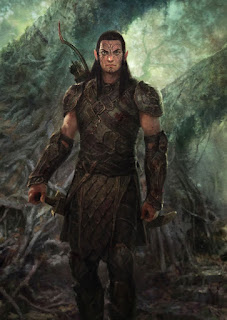 Danaeron Night 1 Journal
After days of travel with my charge, the cleric Ennis, we came upon the broken wagon of travelers I’ve watched and kept a wide berth from. A half human drew a sword upon me. I could have felled him, before it was unsheathed. Luckily, the leader of the wagon intervened. I was surprised to find a Druid among them. She looks like a demon and when I asked her of the Great Oak she seemed to laugh and insult him. I find the world outside of the woods confusing. It is out of balance.

When we came upon the town, it was besieged by the greatest beast I have ever seen. A thing I only heard of in legend. A dragon. The shock froze me. Is this what the world is? Chaos? Coming to my senses I confess the beast is of interest to me. I've hunted many things, but to fell a legend...I would be the the greatest hunter to the wild one himself. The town was burning, kobolds and cultist. Before we entered battle a strange man appeared. Dark in skin and smelling of the sea and too much wine. Is everyone outside of the woods so loud? Though he knew what was happening. Some cult of the dragon. Trying to raise long dead dragons. Rillifane, they succeeded. This seems to make sense to the Druid and Ennis and the stranger Sallos. We dove into battle, the half human, yenorin, is an eager pup. He tripped into our battle, but his rage proved better than kobolds. My bow and sword met the hides of many enemies. Lokur would be proud. Ennis showed great skill with her bow. Still full of form from training, but effective. She shows promise. She took a blow to the gut that will scar. I showed her my wounds in an attempt to comfort her and compliment her fighting, but my words rarely come out right. The Druid nithbis conjured a whip of thorns and blessed me with the nature god's words. She is a mystery to me, but I find her of some small comfort in this world. We saved a guard and her family and fought to the keep.

The governor welcomed us and we took missions to help the town. I voted that we save the mill first over the people trapped in temple. The keep had many already and I've seen many winters. Without food many more would die. I looked to Ennis for guidance. Where she goes, I go. I think the shock of her first battle shook her. She was not the young high born I've traveled with for days, rambling about gods and divinity. The half human wanted to save the temple. Noble, but again eager. Nithbis seemed to weigh the options and we went to the mill. In the sally port we were attacked by a swarm of rats! I'm ashamed to say I was nearly taken out by a hoard of small beasts. We managed to kill them all and work to the mill. Ennis and I were shadows in the bush, Nithbis walked on the bank untroubled. Yenorin stomped through the river itself. The mill was a trap set to catch us. We managed to destroy all the foes. I admit Yenorin was admirable. He may be eager but he is a capable warrior.

Back at the keep I'm told the temple fell. I go to meditate alone on the roof. Rillifane, what is all
This? So much chaos. So much distinction. A town in ruins, a great beast, a party outside of harmony. I take out the metal canary lantern of Lokur. What should I do, old friend? As if we are back under the hills and trees of early autumn. I see my mentor and friend smiling again.

“Rillifane asks that we strive for balance and harmony. A ranger brings them when they are absent. All things are branches on the great oak. Including others. This group of you needs guidance. Be that. Teach Ennis the ways of her people. Steer Yenorin to be a tempered warrior. Befriend nithbis, a Druid and agent of Rillifane (even if she does not say it), follow the stranger Sallos, for he is a wanderer like yourself.” My will is steeled. My attention moves to the dragon. He is circling like the hawk over the meadow. I study him. As if he sees me, he dives! Nearly hitting the keep before his wings stop him, he lets out a burst of storm. Lightning hitting the keep! I must check on companions!

Thanks for joining, hope to see y'all back for part two!

Hoard of the Dragon Queen In Character Journal Tyranny of Dragons